There is so much opportunity for those who are willing to try creative ways to solve problems.

Here is a great little story from Kenya that I find inspirational. I believe all of us see problems every day but few try to solve them with innovation and the tenacity to adapt, overcome, and get to the finish line:

The world belongs to those with a positive attitude who get started, put in the work, and persist to the finish line, not the intellectuals who sit in coffee houses debating on what might or might not work.

Choose to be a man or woman of creativity and action.

I recently learned that modern society corrupted the word priority. One hundred years ago, there was no plural form: priority was singular only — it meant the single most important item.

Today, we have corrupted the word to mean “important” instead of the most important. I think we should return to the original definition.

I would suggest picking a self-improvement habit-of-excellence and focusing on just that one, until it truly is a habit in your life. Once your foremost priority becomes a habit, then and only then, create your next foremost priority resolution. Don’t dilute your effort with the list of 10 or 20 resolutions – that lack of focus is why most of us never seem to accomplish our long list of resolutions each year.

Once you pick your priority, leave reminders everywhere — on your computer, smartphone, and tablet wallpaper screens, your bathroom mirror, in your wallet, in your car. I really like the idea of have a calendar with red X’s on every day you made progress on your one true priority. Excellence comes from focus on building your own habits. 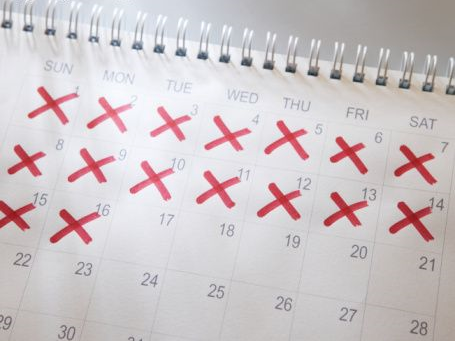 Some goals lend themselves better to the Red X system better than others. For a fitness goal, the Red X feedback is easy. For writing a book, break the long project into small steps, like writing a minimum of two pages or 300 words each day. For complex projects, you will need to pre-plan each day’s progress step with your first cup of coffee, but the idea is the same: make progress daily.

Although I am certain I have used this quote before, I can’t resist including it here:

Excellence is an art won by training and habituation. We do not act rightly because we have virtue or excellence, but we rather have those because we have acted rightly. We are what we repeatedly do. Excellence, then, is not an act but a habit.

Why not ask people in conversation what their “foremost priority” is — right now — whenever conversation allows. If you listen well, you will learn something of importance about your friend, and you might just inspire him to improve his focus and succeed more easily. Inspiration is a great gift to give, not only over the Christmas Season, but all year long.

Finally, build a habit of saying “foremost priority” instead of “priorities” in conversation. Let’s do our part to get back to the meaning of the word and do our part to beat back the constant distractions of our modern, smartphone, media, and internet dominated life.

As I observed last year, very rarely do people try 5 different ideas to succeed, yet an often used phrase is “I tried everything!” — the truth is no, you did not.

I ran across this article a few weeks ago. It illustrates the core idea of pivoting and changing your approach when Plan A, or Plan B, is not working out. Quitting too quickly is the norm.

The original article is available at fastcompany.com but I included the text below, in case fastcompany takes down this excellent lesson someday in the future. I do recommend subscribing to Fast Company — few magazines capture the spirit of entrepreneurship better.

How YouTube, Instagram, Pixar, And Others Found Major Success After A Big Pivot
Sometimes the best way forward is a giant leap sideways. Here are 10 companies that bet big on a new direction.

1. WRIGLEY
Soap seller William Wrigley Jr. switched to hawking baking powder in the late 19th century. To drum up business, he gave away chewing gum, and eventually he realized that customers were more excited about the freebie. The gum stuck.

The payoff: Now a Mars subsidiary, Wrigley is the world’s largest gum manufacturer.

2. NINTENDO
Fusajiro Yamauchi founded Nintendo in 1889 as a purveyor of playing cards. His great-grandson unsuccessfully expanded the company into taxis and “love hotels” before hitting gold in the early 1970s with an electronic shooting game.

3. LISTERINE
The mouthwash was first marketed as a general-purpose antiseptic, meant to get rid of both household grime and, um, gonorrhea. In 1914, pharmaceutical company Warner-Lambert started selling it as a halitosis remedy.

The payoff: Current owner Johnson & Johnson sold $340 million worth of the stuff in 2015.

4. 3M
The Minnesota Mining and Manufacturing Company (get it? 3M) originally planned to sell excavated minerals to manufacturers. But when that didn’t work out as planned, it shifted to producing finished items, such as sandpaper.

The payoff: Some 60,000 products later, 3M makes everything from Post-its to surgical soap.

5. TEXAS INSTRUMENTS
Geophysical Services Inc. made tech to help gas companies find oil. The start of WWII forced GSI to halt its profitable overseas business, so in 1946 it formed a lab to develop electronics.

The payoff: The lab grew into Texas Instruments, maker of your high school calculator and still a top semiconductor producer.

6. PIXAR
When Steve Jobs bought into the business that would become Pixar, it was a maker of graphics oriented computers. He refocused on software, and Pixar later started making animated films.

The payoff: Pixar’s movies have pulled in more than $10 billion over the past 21 years.

7. PAYPAL
Conceived as a mobile-encryption service, the company switched to cash transactions (initially between PalmPilots). After eBay users latched onto the service, PayPal developed into the leading tool for web-based payments.

The payoff: PayPal helped fuel the e-commerce boom and today is worth more than $47 billion.

8. FLICKR
Caterina Fake and then-husband Stewart Butterfield started Ludicorp to develop online games in 2002. One feature let players save pics, and it proved so popular they moved away from games and built a photo-sharing service.

The payoff: Flickr became the go-to home for digital photos and was acquired by Yahoo in 2005.

9. YOUTUBE
YouTube launched in 2005 as a video-dating site. Users didn’t bite, but the company’s founders soon noticed that people had started sharing other kinds of video content.

The payoff: YouTube is the world’s second-most-visited site (after Google). Viewers consume 3.3 billion hours of video every month.

10. INSTAGRAM
Burbn tried to be many things: a Foursquare-style check-in app, a friend-meetup service, and a photo-sharing tool. Noticing that photos were users’ favorite feature, Kevin System ditched the other functions and rebranded as Instagram.

A version of this article appeared in the November 2016 issue of Fast Company magazine.

My point is simple.  Don’t give up.  Trying many ideas to make your idea succeed. And if those don’t work, pivot, more than once if needed, with no loss of enthusiasm. Its the best way to succeed.

Did you make note of it?  Without writing it down in your trusted journal or your trusted system, a place where you can find it later — without much trouble — that golden nugget just learned is likely to disappear in some inaccessible recess of your mind.  I find that occasional review is the key step to assimilate everything learned into a cohesive factory between your ears. 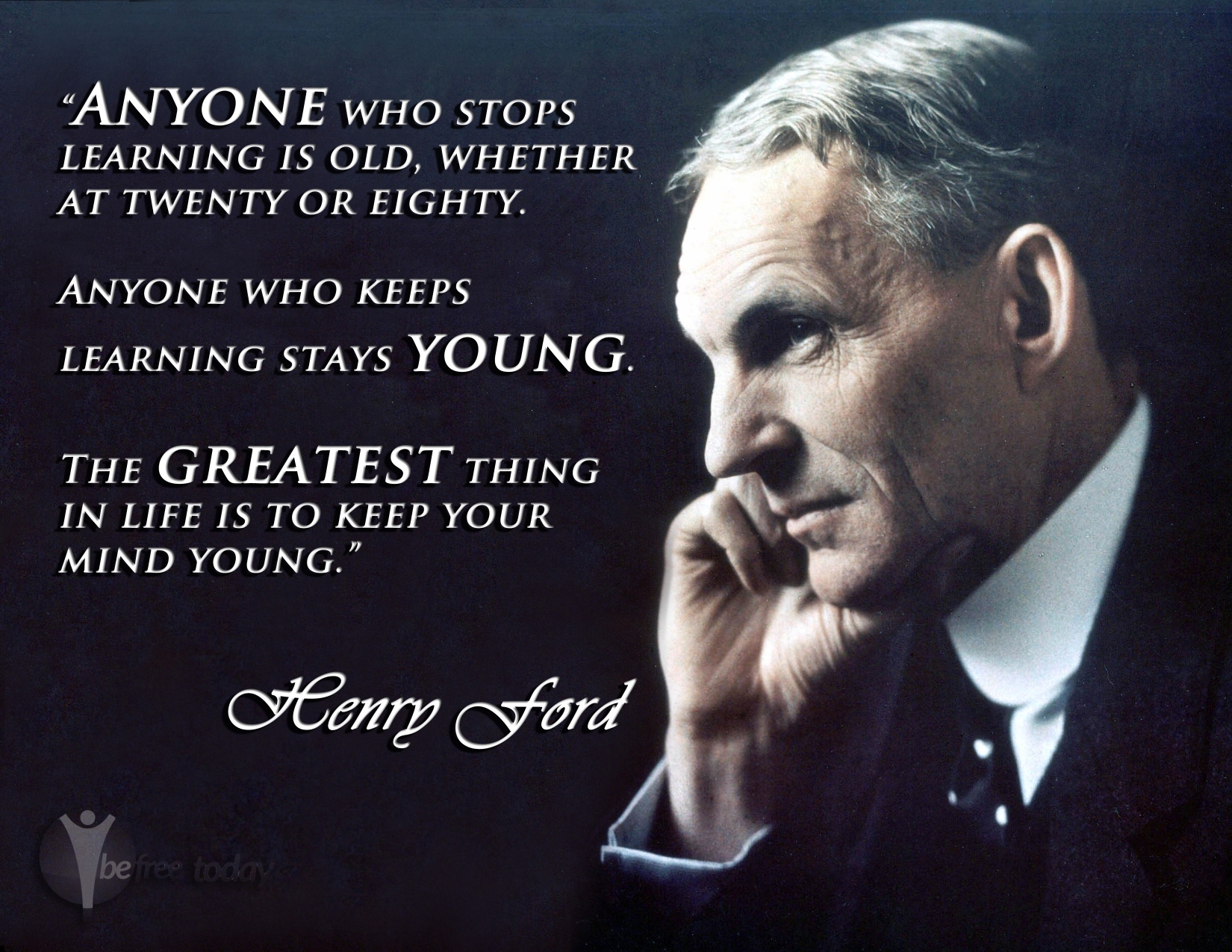 Anyone who stops learning is old — Henry Ford

I realized that Mr. Ford was right. Learning one thing, at least weekly, is crucial to staying young. My contribution is write it down: My current journal is Day One on the iOS ecosystem, if you want a suggestion of trusted system to use. If you choose another, test your backup methods, and backup at least monthly.

Some people become old long before their body gives out. Don’t be that person.